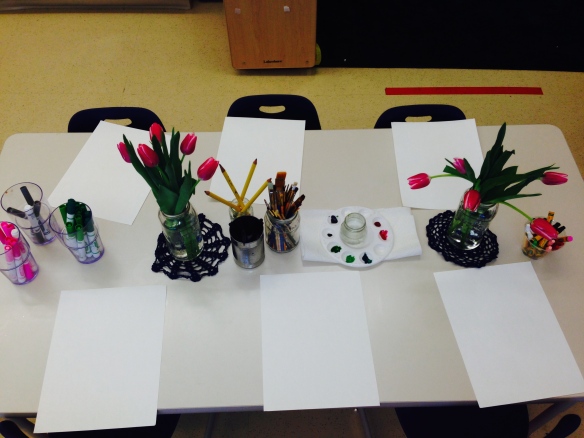 After a parent workshop 2 weeks ago, we adorned the wall space outside of our classroom with representational drawings and paintings our families made for their children (as well as photos of them doing the activity). The kids were enthralled with the display, and ran to the provocation to make their own artwork, which we posted near their parents’.

Have you seen this Slate article about the importance of exploration (versus explicit instruction) in preschool?

I liked this post on a Montessori school’s blog about helping children deal with “mean” children.

Also love re-reading this older (but still so relevant) post about the effect of preschool model on later school success.

I’m in awe of her kindergarten project of wonder project. 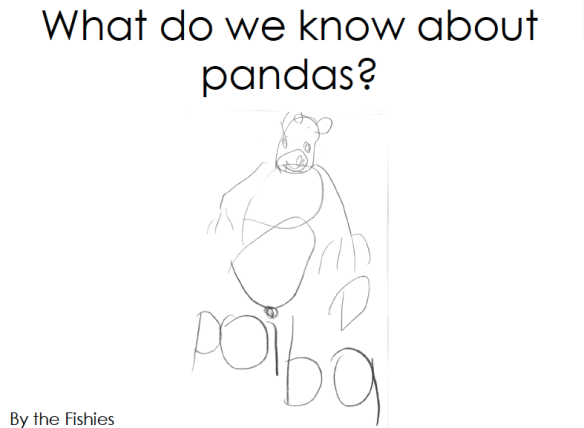 Our zoo project has come to a close. I had such an amazing time learning with the children, and it has renewed my belief in early childhood and especially how amazing project work can be. Last week, we wrote and illustrated a book about everything we know about pandas. So many children contributed ideas, knowledge and illustrations to the book at their own levels. It was really exciting to see the 5-year-olds typing out words and labeling their pictures and the 3-year-olds thinking about how to draw a panda representationally.

I loved presenting the “published” project on Wednesday! In the picture above, Isaac learned that pandas are from China. He remembered that when we looked at the map, China had lots of mountains (and, of course, bamboo).

I think that we are all going to miss watching the panda cam from our panda dens, although we did take one apart this afternoon to re-use for our next project ;)

Through our STEM partnership with the Smithsonian, we have been following our children’s interests building structures. After our visit to the zoo, we started a focused exploration on enclosures, building exhibits for our pretend “zoo.” As we built, we developed important understandings of patterns, symbolic representation, numeracy and cooperation. (These objectives use Creative Curriculum’s GOLD.)

E, R, D, I, and K wrote stop signs to protect their work over time, so that they could revisit their structures.

Objective 14a: Thinks symbolically Attempts to write words to label a picture

After sorting animals into “scary” and “not scary” animals, and discussing why, Isaac made an elephant exhibit, and wrote “lfant” on a card to label it.

Objective 14a: Thinks symbolically Attempts to write words to label a picture

K and R built complex structures, using an AB pattern and experimenting with stability. They compared the sizes of each other’s structures, and later, other children, like L and T used measuring tapes to measure their enclosures.

The children were showing an interest in pets, and we planned a field trip to Petco to tour the store and see my dog get groomed. We decided to also go to the National Zoo, though it would be cold. Prior to the trip, we talked about the indoor exhibits at the zoo, and the children voted on which exhibit they wanted to see. One of the children had already seen Bao Bao, the National Zoo’s panda cub, and excitedly talked about him.  We asked each child what he/she preferred, and tallied the results together. The children voted to visit the panda exhibit first, and then the reptile house. We were lucky to visit on such a cold day because there were so few people there, and we were able to watch Bao Bao, Mei Xing and Tian Tian for a while (which I mentioned here). I thought that this would lead to a conversation between which animals would make good pets and which would not, but the children had other interests…

A conversation before nap time:

Child: What is that dark thing?

Me: What dark thing?

Child (I noticed he was looking at a photograph from the zoo): See it? There by the panda?

Me: Oh that’s like a cave that the panda goes into. It’s called a den. Should we make one?

First we painted two large boxes black, and then compared the boxes against our photographs. We noticed that the real dens “were brown with rocks” on the outside, and then painted rocks on our dens.

The giant pandas at the National Zoo are named Bao Bao, Mei Xing and Tian Tian. We labeled two of the dens for Bao Bao and Mei Xing. We pretended we were pandas, and that citiblocks were the rocks that Mei Xing often lays on and that PVC pipes were bamboo.

A child was pretending to be Mei Xing, laying on “rocks” and “eating” bamboo. She got upset because another child was playing with her bamboo.

Me: Can he be Bao Bao? What does Bao Bao do?

Child: She crawls just like Mei Xing but a little slower.

I am very conflicted about the use of technology in the preschool classroom, and try to limit it as much as possible. The smart board in my classroom is hidden behind a shower curtain (and also is much too high for my children). However, we did watch the Smithsonian’s panda cam to make observations of Mei Xing and Bao Bao during centers, and they drew what they saw (or acted it out). We wondered out loud about the giant pandas, and kept a list of our questions. One child wondered if pandas had belly buttons. We made predictions and answered our questions using non-fiction texts (pandas do not have belly buttons, at least that we could see :).

My co-teacher and I went to see the amazing Lillian Katz last week, and I have been re-reading her book and reflecting on the project approach (here are some great tip sheets). This is the kind of child-directed learning that I love to do, and I hope by offering children more opportunities to make their thinking and learning visible, we can continue to learn together. I am finishing my first documentation panel of this learning adventure! 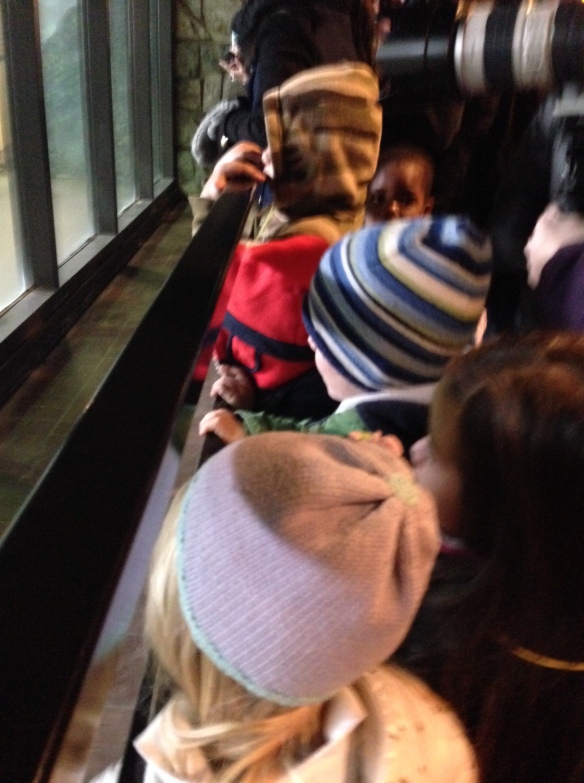 [They were so in awe of Bao Bao, the baby panda at the National Zoo]

I LOVE the snow, but I start to go pretty stir-crazy after more than 4 days at home. Last Wednesday, before our snow days, our class took a trip to Petco and the National Zoo, so I’m super excited for some provocations I have planned for the week ahead.  I’m hoping to spark a full-blown exploration into pets (and wild animals), with some interesting conversations about what makes a good pet, but we shall see what sparks the children’s interests :)

– I was lucky enough to visit School Within a School in DC a couple of weeks ago, and if you are inspired by the Reggio approach, you MUST check out their atelierista’s blog. The post about the winter solstice is awe-inspiring.

– I’m super excited to have just gotten a Donor’s Choose project funded, so we will be replacing our over-stimulating rug in dramatic play, finally! (Remember this?) PLUS, with a gift card I received from a friend, I was able to order a small order from Montessori Services, including a new practical life activity. The Education of Ours has some of my favorite Montessori practical life inspirations.

– Love this article about the importance of play on ASCD, and how Valerie Strauss of the Washington Post is highlighting the over-assessment of our kindergarteners in this column. (Also, Alfie Kohn’s concerns about Universal Pre-K).

Happy long weekend! Hope to have some exciting posts this week from new experiences and provocations in the Fishies’ room.

“Need more proof that society is hurrying childhood along? … The US DOE website (2009) says, “Awards in Race to the Top will go to states that are leading the way with ambitious yet achievable plans for implementing coherent, compelling and comprehensive education reform” — whatever that means. We assume that a committee of government lawyers under the influence of freeway exhaust fumes or hard liquor composed the prose on the website. We were unable to decipher the slipper and obtuse language enough to understand exactly WHY there is a race and precisely WHAT everyone is racing to the top of. “

Our ECE book club just read Let Them Play: An Early Learning (Un)Curriculum by Jeff Johnson and Denita Dinger, which is amazing, and I’d highly recommend to fellow “play-obsessed” educators. One of my favorite parts of the book (besides the biased political emphasis highlighted above :) were the messages about treating teachers as artists (opposed to cogs) and thinking about policies meant to make good teachers great, rather than just eliminate the awful ones. Managers should eliminate the awful teachers… do we need policies to do that? Or are our policies meant to help children actually hurting great teachers, and in turn, hurting the children they serve? There are also some amazing points about how we, as early childhood educators, need to be advocates for the children for whom we care.

Let Them Play also complements NAEYC’s new book on Emergent Curriculum well, which was also a great read, and LTP gives more rationale, to save up for when you are defending your best practices, as so many of us, especially in elementary schools, often have to do.

For one, we give so much importance to the environment.  Beyond the right of having a school is the right to have a school that is beautiful and taken care of with an attitude of care so that parents, children, and teachers want to come to school every day.  We have in some ways confused luxury with care. – Vea Vecchi (via) I teach 3, 4 and 5-year-olds in a Washington, D.C. dual-language, inclusive classroom in a public elementary school. I am inspired by the Reggio-Emilia philosophy and my students -- every day. ECE blogs were immensely valuable to me as a new teacher, and I hope this is in an inspirational place for fellow teachers, and, selfishly, a place for me to reflect on my growth as a professional. Follow me on Pinterest and Twitter.